--*--
​
Sallana was born forth as War ended and Peace began with the touch of Skeira, unveiled by Harateth. They courted, and laid together- First creating the god of Bilworth and his Twin- Jax. Sallana and Shalherana then worked together to create the first ten-thousand Elves. She graced them with lovely visage, often stepping to disguise herself among them to frolic. Throughout the wars of Queen Grief, she brought forth joy and uplifted spirits in the face of the horrors, providing the moral support to those in despair, forever set against the forces of Corruption. In an act for her beloved as he fell, Sallana seduced the pieces of Harateth from Rahas, aiming to rebuild them with the growing power of the Worshippers of Sun. Yet, not all was to be- and Harateth was not rebuilt, simply reborn into Ignis Synnove.

Time then passed.. and upon the realms of the Planar, there came her cry. To her side, there formed Vermella, Daughter of Shalherana and Skiera - of Life and War. As she lay there, wounds displayed by Aldred's beast and blood pooling around her, she gazed towards the wistful Goddesses in pain. What once there was conflict between them, there was now.. only the instinct of protection.

Each will destroy the Other, if they can."
​
The Heart Prophecy has floated among the populace for generations, but few could have guessed that Aldred's great beast would fulfill it. Vermella had begun to fade from his deadly blow, but that essence did not disappear into nothingness. Sallana had then pulled her mortal form away and cupped her hands around her remains to bring them to herself. From the motes of divinity, sparks of red and dissonant thoughts began to swirl and twine. The Maiden and the Mother coalesced, two halves of one being, and those most devout and blessed of either, would feel this union deep within their souls.

There no longer stood an innocent, swaying spirit, but a fierce mother with understanding and tolerance towards the tantrums of wild children left unattended. The Maiden's Mother will stand her ground to protect her kin and bring fresh joy to the sorrows of this world, breathing anew.

Followers of the Maiden's Mother are often priests and priestesses during matrimonial ceremonies, and are found mostly among traveling bands. They give blessings to farmer's fields in their travels, and prepare tinctures to aid in fertility. Lingering beliefs of innocence and free spirited youth cling to young blooming men and flowering girls in hopes of finding true love, as Sallana bids it.


Holy Symbol:
A white cornucopia with red roses and fruit spilling out.

Tenets of the Maiden's Mother:
~Give not your worship to other deities, for you only need I.
~Respect yourself and your body, as well as the bodies of all other creatures.
~Shed not the blood of the innocent, nor that of kin. But protect your own as fierce as a maiden's warrior.
~Give prayers in song, and have music and poetry be only pleasing to the ear.
~Let not the weight of sorrow and society shackle you, embrace the winds and merriment that move you.
~Do not commit adultery.
~Take no shame in whom or what you love if no harm becomes of it, welcome it.

Temples, Cathedrals, or Shrines:
-A Church dedicated to Sallana in the South.
-
Last edited by a moderator: Jul 31, 2019

Appearance: Although the Gods no longer walk the realm as they once did, ancient texts still scribble furiously over their details.
Sallana favored to appear as a beautiful silver elven woman, capturing the hearts of all around her. Last she was seen, her dresses seem to carry hues of red amongst the pink. 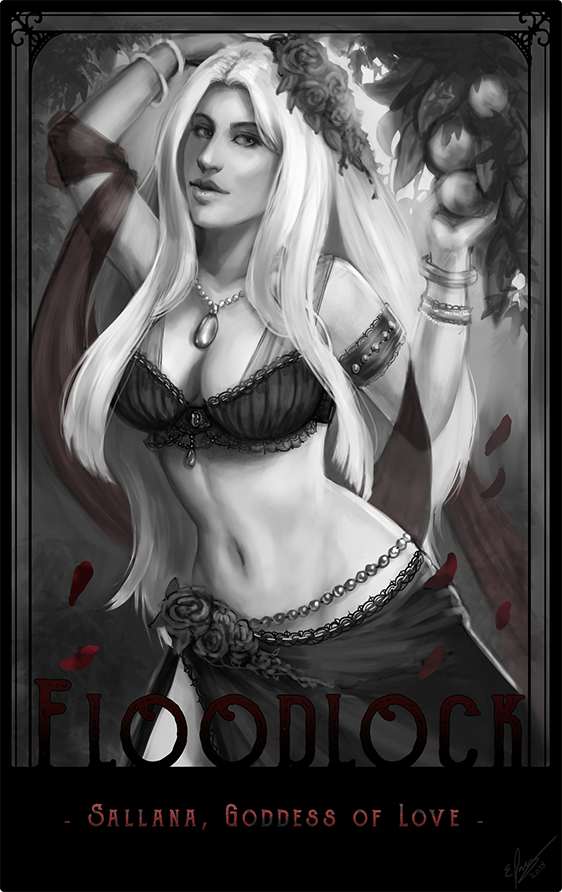