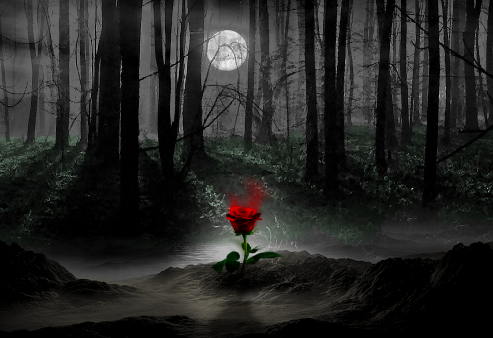 History
Legend say that The Caparii were created by Shalherana to defend her forests from evil-kind, and they have done so valiantly since before recorded time. The first of their kind was named Vermella. Naturally skilled hunters and trackers, these woodsmen were known to have stealth and keen senses which made them valuable scouts, and deep reconnaissance was their specialty. Long have the Lenngseah Óancoll Caparii inhabited the forests in the heart of the Eastern Frontier. Even after the peoples of the Northern Kingdoms arrived from across the Sea of Storms, they remained largely untouched because of how reclusive they were. They continued their peaceful existence, shut out from the rest of the world, despite tragedies of civilization and evils aiming to harm their way of nature. They do not pay heed to what tragedies befall them, refusing to change from their ways because of it.

Time went on, and eventually the Lenngseah people’s refusal to change came back to haunt them, in the form of an evil more vicious than even the demons that had massacred them before - Aldred, the twisted Godslayer borne of Visage. The Cursed Scion descended upon their peaceful festival with his beasts, horrific mockeries of nature. This time, the slaughter - or rather, the enemy who carried it out - caught the attention of their Queen. Vermella descended to them in the form of a great Guardian to do battle against Aldred. But even the Caparii Queen's efforts proved futile, as the beasts were too numerous and the Scion too powerful. It was on the fields of slaughter, weakened and without dignity, that Vermella was tricked by Aldred and stabbed through the heart. In the greatest tragedy to befall the Caparii race, the Queen fell.

This time, the message rung painfully clear to the Lenngseah Óancoll: the world was not safe for them, no matter how hard they may try to seclude themselves from what dwells outside their lands. As the Goddess Sallana took up Vermella's mantle in her dying moments, so too did the Caparii of the forest swear a new oath, that they would never again be caught helpless and alone to be slaughtered by the forces of evil that seek to prey upon them. They would not hide from the world any longer, but instead venture out in search of new strength to aid themselves and their kin. They begin now to step forth from the forest and into the light of the world, with the spirit of determination and newfound purpose driving their wanderlust. But no matter where their wandering takes them, they do not forget from whence they came, and their hearts still lie within the forest.


Geography
The Lenngseah Caparii originate from the temperate forests in the center of the Eastern Frontier, and this remains the center of their culture, the home that many of them love and return to in order to maintain their family roots. However, as they have ventured out, they have made their homes in many different places across the continent. Lenngseah families can be found living almost anywhere. But even those families who have uprooted to live elsewhere still think of this forest as their homeland.


Personality
The Lenngseah are generally cheery, welcoming people. They delight in sharing company with guests, seeing new places and chasing new experiences, and can often be found in places where people gather, wandering through trade cities and great capitals alike. They enjoy taking part in celebrations and festivals, seeking them out across the continent to take part and bear witness to different cultural experiences.

While they are generally easy-going and open-minded, taking joy in exposing themselves to new and often varied experiences, the Lenngseah tend to be rather stubborn when it comes down to their own traditions and beliefs. They take the mantle of guardianship very seriously, and highly value the ability to defend those around you and prevent unnecessary bloodshed. As a result, they often come off as being strong and determined, and are far from submissive.


Physiology
Most Lenngseah tend to be Lighthoofs, though there are exceptions. Reds are sometimes considered among them, but their solitary nature generally runs against the more rooted and communal heart that lies at the center of the Lenngseah culture. Lenngseah Greathorns do exist, but are not as widespread and nomadic as the Lighthoofs, tending to settle into one place for a longer period.


Hierarchy
The priestly class are considered the highest authority among the Lenngseah. Priests among them are well-versed in Sallana’s doctrine, and the old ways of the Caparii Queen, and as such are looked up to as wise mentors and the ones who set the status quo of their society. With priests being the only exception, their society lacks social class and division. Because they value their homes and their families so highly, they stick with each other and view each of their lives as equally valuable.

The Lenngseah know no ruler - especially, they never recognize a King or Queen. It is considered taboo to claim such a position. This is done in honor of the fallen goddess Vermella, the only Queen they ever recognized.

Beliefs, Religions and/or Philosophy - The Lenngseah are highly traditional and rather zealous in their faith. Due to Sallana having taken up the mantle of the fallen goddess Vermella after she died, they hold enormous respect for her, having taken easily to her new doctrine and grateful that their faith need not be divided by the rest of the Pantheon. As a result, Sallana is worshipped all but exclusively by the Lenngseah. Those who worship other gods are often ostracized, though not completely cast out.​
Perhaps the most important part of Sallana’s doctrine to them is the mantle of guardianship. The Lenngseah take this commitment incredibly seriously, and place significant value in the ability to protect those around them and prevent unnecessary bloodshed. In line with Sallana’s doctrine, they also highly value their freedom, hence their tendency to move around almost nomadically in their pursuit of celebration, people to meet and places to see. Doing so is spiritual to them, and if they are forced to stay in one place for too long it often provokes feelings of anxiety, frustration and sadness. Song and dance is also very important to them, and they consider all music to be pleasing to Sallana, even if it is not at all about her or related to her.​
​
They consider red to be a sacred color, representative of sacred blood and Sallana. Caparii with red fur or hair, and even non-Caparii with red hair, are thought to be blessed by Sallana’s favor. Roses are also considered sacred, as they represent both Sallana and the fallen Caparii Queen.​
​
The Lenngseah are highly protective of the Caparii language, Fae, and while it is not unheard of for them to teach it to non-Caparii, learning the language is a symbol of great trust, and means that the individual is a part of a Caparii’s family. It is considered taboo to teach the language to strangers, or simply in trade, as a disrespect to the language and culture as a whole.​
​
Traditions - The law of unnecessary bloodshed is often applied through a ‘give and take’ philosophy. Whenever something that is harmful to life must be done, something of equal value is done to repay it. If a tree is cut down, a sapling is planted in its place. If an animal is slain in a hunt, what is not used is returned to the wild. If someone is harmed, efforts are taken to make sure they can heal. It is not seen as satisfactory to trade “an eye for an eye”, as this simply leads to more bloodshed, and does nothing to fix the damage that was done.​
​
Like all Caparii, the Lenngseah come of age at 13 years. This is celebrated with a ceremony which includes a performance of song, music or dance in honor of Sallana from the Lenngseain who has come of age. After this, they receive a pendant in the shape of a rose blossom, usually carved from wood but sometimes made from metal.​
​
Because they take guardianship so seriously, it is traditional for all Lenngseah to learn how to use a weapon. Many learn to practice archery, while other common weapons are spears and axes. Their combat style generally is not upfront, instead preferring to rely on their speed and mobility, and as such they are best suited for archery, scouting and dealing with unaware enemies.​
​
Clothing - In line with their quick-footed nature and fighting, they tend to wear light clothing and armor that is unrestrictive to their movement, such as leather and cloth. Because red is a sacred color, only priests are permitted to wear red generally, unless there is a religious celebration underway.​
​
Holidays - Lenngseah will take part in almost any celebration or festival that is in the name of peace and happiness, especially in the name of Sallana, and will host them at any time they wish. It is especially common and practiced for a celebration to be hosted on the eve of the blood moon, with the moon’s orange-red color signalling the presence of Sallana herself and honoring the fallen Caparii Queen. It is traditional for Lenngseah to return from their travels for such a celebration, as it is also a call back to their roots and a remembrance of their history.​
​
The other common celebration is the coming-of-age ceremony, tachtaois seramnas (tak-toh-is ser-a-na). This is generally a much smaller, private ceremony that includes only the newly adult Lenngseain’s family and close friends.​
​
Wrtier Credits:
French Roast
RagingLunacy ​