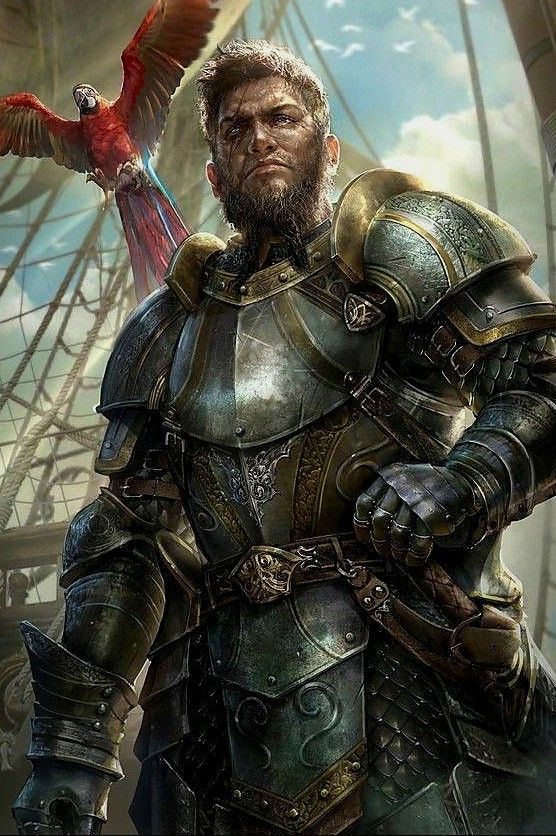 A Sangrian is born in the coldest north, and the warmest southern lands, taking home to the eastern strip of what they call the New World - Austermere. A downtrodden, hard working folk that hold immense interest in sports, hobbies, jobs and money to distract themselves from the ongoing threats to Altera. Dedicated to themselves mostly and others who are close to them. they will fight and die for glory and hold immense respect for other Sangrians, despite their playful nature. A Sangrian will not take the world seriously. They have nothing to lose and everything to gain. Fond to activities close to water, including spearfishing, whaling, and sailing, most Sangrians are not without scarring, or dangerous tales of the sea. They pursue the lifestyle of riches, wealth, and a generally carefree life. The importance of tattoos within the society of Sangrians flows throughout the culture like a river of permanence, a symbolic of their legacy. Sangrians are known for the stories behind their tattoos and are not likely to get one if it does not hold significance. Alongside sports and warfare, they excel in swimming and naval combat and exploration.

History
Tales tell of the origin of the Sangrian Kingdom having formed like that of a snowball rolling downhill. The idea of Sangria sprouted in the Northern Kingdoms as an alcohol brewing faction of hired mercenaries, growing popular by the day. The group grew so collected and uniform that they began to claim land for their own as a collective. Common folk and travelers who lived near or in their lands would often associate themselves under the protection of the mercenaries. It was not until they arrived in Austurmere and setting up their first camps in the Northeast that the group had began enforcing laws of their own. With the support of his sentinels and his people, the Master Sangrian had declared Sangria a Kingdom with a coronation that would transform the hierarchy of the faction for good.

Over time, the Sangrian become more of a Culture than a Kingdom and has seeped into different spectrums of the world.

Geography
While Sangria's lands span far across the continent, Halbed holds a large amount of the population being the capital of the Kingdom. There, the walls are tall, the air is dry, and aside from the arctic waters, all that spans for miles is white. It is in the capital where most of the Sangrians receive their training. The second highest populated city is that of Ralidor where the temperatures of the plateau are much more tolerable and snow is impossible. In between Ralidor and the Capital city, there are a multitude of land claims ruled by Lords and Ladies of Sangria and protected by the crown. 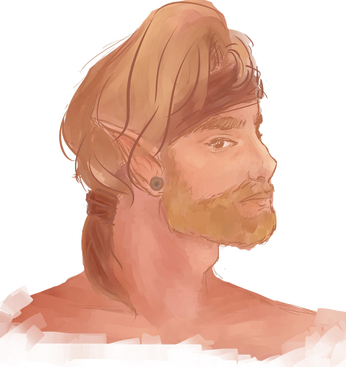 There is a certain charm to being apart of the cultural mixing pot of sailors. They commonly hold an affinity for hard alcohol and share hedonistic views on life. The Sangrian is casually very playful and carefree but at the same time, very impulsive. A Sangrian's temper is explosive. Women of Sangria often share the same style as men to reflect their abrasive nature. More often than not, though, you'll see a grin on their lips.

They enjoy their lives through drinking, gambling, dedication to sports, warfare, and profession. Those who risk their lives at war are looked up to as heroes- And those who excel in sports may gain the status of a famed player. Soldiers who enlist into any army hold great pride in their banner, no matter the group. Next to loyalty, sailing is also a very highly iconic image of Sangrians although many merchants are wary to sail too close to the Sangrian ships as there are common cases of crews made entirely of defected Sangrians pirating the waters.
(Some common tropes of Sangrians include personality traits of real-life pop culture pirates, mercenaries, nords/vikings, and members of House Greyjoy from Game of Thrones.) 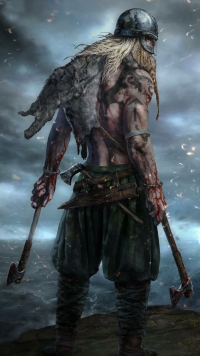 + Northern: The Northern Sangrian is used to their bitter cold surroundings, and are more accustomed to a military-esque path, as well as most likely to hunt for their food, though they do enjoy the imported food just as much. Tend to hold greater discipline and physique over their southern counterpart, as well be a bit paler, and burn easier under the sun. They are excellent swimmers, but rarely get the time to practice.

+ Southern: The Southern Sangrian wears tanned skin from working in the hot sun. More accustomed to farming and water sports. They enjoy the food they farm, though also eat the small to medium wildlife that lives on the island. Tend to hold amounts of discipline from team sports, as well as decent physique due to the water orientated sports, though trumped by their Northern couterparts. They are excellent swimmers and sailors.

Physiology
A Sangrian's skin tone ranges in all tints across the color wheel. Sangrians otherwise hold a tanned color, though the Sangrians that decide to reside in the north usually lose that warm skin tone. Most Sangrians take pride in their tattoos, usually simple in drawing, but they almost always have great meaning behind them.

Eyes usually range from the most common and attractive ice blue, to grey, to dark sea-like blue. Sometimes an emerald or olive green, and in some rare (and declining) cases, an amber.

Hairstyles sometimes incorporate beads, strings/bands, small bones, and headbands/bandanas into their hair. Styles usually consist of small to medium length, with occasional shaved sides, and leaving the rest to grow out, either put in ponytails, buns, or braided/beaded, styles also include thick dreads- Usually tied back. The northerners would wear the same styles, only having much more overgrown hair. The most common hair colors being tints of red, tints of brown, and most often tints of blond. It is uncommon for Sangrians with black hair, although the culture is very accepting of most anyone, so it is not unheard of. Going days without shaving can be a given for the men of the culture.

Stature and posture usually being relaxed, and laid back, unless showing out for sports or warfare. Although it must follow individual race lore, more often then not would hold athletic builds, also depending on their participation in sports, and profession.

Common clothing colors are usually very unsaturated and worn colors. These include Dark Brown, Grey, and Black, and Khaki tones. Sub colors include purple, grey, and olive. On some occasions, Gold highlights. Casual clothing sometimes includes light armoring. Northerners and some southerners are familiar with leather, furs, and cloaks (light or heavy), long-coats, jackets, thick leather boots and generally loose clothing. For example, common trousers of a Sangrian could look something like these viking pants, loose baggy bottoms fitted at the bottom by foot wraps. Striped waist scarfs/fabrics draped at the hip and bandanas/headbands, fur hats and tricorns are a common trend. Women of Sangria often share the same style as men to reflect their abrasive nature.

Hierarchy
Among the lowest of the Sangrian hierarchy fits the working class or citizens. Those who fit themselves into the higher paying jobs such as a knowledgeable scholar in the Inkwell, or a soldier within the soldier's ranks are a step above average working class. If a man or woman within the Kingdom holds land or is particularly wealthy grants them the status of a noble, but the most noble of men are generally the most glorious, and hold that wealth for a reason. Those who have been knighted or given a special position within Sangria are actually above the noble class, as Sangrians hold a high respect for them having earned the position. Commanding the three branches as well as the knights are the sentinels, The Inkwell, Regiment, and Ebon Sentinel and are apart of the council that dictates Sangria. The most high-ranking and eminent role in Sangria is that of the Crown. Respective titles of the King and Queen are the Konungur and Drottning.

Society
Those that train as a soldier in the north are looked upon to be great warriors, where they often face anything without fear, placing their life in front of any that oppose their fellow soldiers, and citizens alike. Regardless, they still hold great attachments to things that bring them pleasure, and are can be selfish. Those that train for sports in the south are recognized for their great teamwork, often learning selflessness, and how to work as a joint effort to overcome any and every task. If ever called for war, they would find strength in numbers. Still, the goal of most every Sangrian is through 'Him of Luck' to reach great fortune.

Lifespan
The lifespan of each member is dependent on their respective race. In a Sangrian's youth, they tend to stick with their family by blood, though they could be sent up north, if not already living there, to most commonly pursue a soldier's life. Youth in the south are usually more into water sports, or farming.

Young adults up to middle ages are usually the prime of their life, where they spend their time perfecting their profession, mastering their training, and learning new techniques in their respective sport.

Once they've retired from their current jobs, they almost always leave for the southern lands, where they spend their time fishing, sailing, coaching sports, and teaching their trade. Exceptions to this would be the older knights and combatants that stay up north to train their predecessors.

Religion
Jax is the most upheld deity due to his believed superior status above others, seeing luck as a key aspect to a successful life. Sangrians usually wear Jax's colors as a sign of their religion. It is accustomed to pray for good luck, before an upcoming game, or battle. Sangrian priests of Jax wear thick robes, often tattooed around their heads and faces. They carry around staffs with a large emerald gemstone at the head. The shaft is decorated with gold and purple silk.Worship of Jax seems to be very deep rooted within the ideals of fate and destiny. It is believed that every Sangrian holds the favor of Jax, himself, and will experience an unmistakable and miraculous sign of good luck at least once in their life. This is called their Gott.

Common Phrases
Titles/Dialect
In Sangrian culture, any who fully develop themselves into the culture often develop at least a tinge of a dialect that reflects that of a pop culture sea-salty pirate. The following link gives a general idea into the dialects that a Sangrian would hold in varying degrees [x]. Sangrians are usually referred in reference to their race and goes as following.

Combat (Optional)
Northern Sangrians are trained to the breaking point within the furthest most northern regions. They're typically accustomed to crossbows, axes, certain swords, and polearms, i.e spears, halberds/poleaxes and polehammers. In collaboration with the Norman sword or handaxes, it's common to pair it with a round shield. Southern Sangrians are well adapted to spears, crossbows, norman swords and shields, but not as often as the northerners with polearms. With the influx of plate armor, the cutlass has been ditched- Although it's not impossible some would remain partial to the weapon.